Department Of Labour Ensures Labour Legislation Is Being Enforced Through Inspections 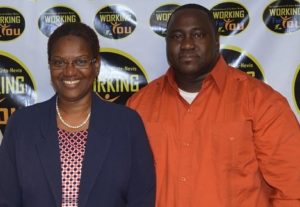 Basseterre, St. Kitts, May 04, 2018 (SKNIS): A major role the Department of Labour plays in ensuring that the Labour legislation is being enforced is inspection, says Labour Commissioner, Shernel James, speaking on “Working for You” on May 02.

Ms. James explained that the inspection is not only to ensure safety and health in the workplace, but to ensure that employers follow the laws. She added that if they do not, there are consequences.

“Some employers genuinely are not aware of certain laws and this is where the Department of Labour, in carrying out inspections, seeks to bring to the attention the employers all the necessary laws and to see if they are in compliance with these laws,” she said. “ Are you paying the minimum wage? Do you know what the minimum wage is? Do you know a worker is entitled to 14 days vacation minimum annually? How do you calculate over time? Do you know that overtime is voluntary? Are you working a worker beyond unnecessary hours that the law requires?”

In doing these routine inspections, said Ms. James, the department is not only informing and educating the employers and the workers of their rights, but also their responsibilities and consequences of noncompliance.

“We will work with them allowing them to correct the infractions,” said the labour commissioner. “If they don’t, there are penalties and fines under the law, which the Labour Department has been given certain powers to do to ensure that employers carryout what is expected of them under the remit of the law.”

According to Lesroy Browne, Unit Head for Labour Inspection, Occupational Safety and Health (OSH), who also appeared on the talk show, the mission of the department is to boost these inspections. He explained that there are two inspection types, the OSH inspections and the social inspections.

“In OSH they look at the conditions of the place,” said Mr. Browne. “When we go in we look for exit signs, we look to see if they have wet floor signs, if they have emergency numbers posted and if they have proper lighting and ventilation. After looking at these few things, we then write a letter to the employer stating our findings. We give them roughly six weeks to fix the issue.”

Mr. Browne said that the inspections and subsequent notice are not to intimidate the employers.

“We don’t intend to come across harsh to the employers, but we want to create a dialogue with the employers,” he said. “In the event that you have some shortcomings or some issues, and come across small issues fixing them, we can give you time.”

The unit head for labour inspection said that the social part of the examination includes aspects such as minimum wage. Questions such as “are the workers being paid correctly in terms of overtime and is it being calculated correctly,” arise during inspections.

“We have issues where incorrect figures are being reported to social security, which is a major issue we are challenged with,” explained Mr. Browne.

The mission of the Labour Department is to foster and safeguard, without prejudice, amicable employment relationships between employers and employees, endeavouring to promote general welfare, social and industrial peace and harmony within the Federation.