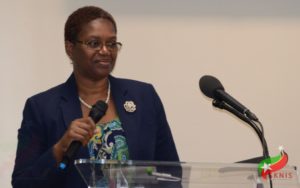 Basseterre, St. Kitts, May 11, 2018 (SKNIS): Commissioner of Labour, Shernel James, has thanked stakeholders for their candid and lively interaction at last week’s national consultation to develop an Occupational Safety and Health (OSH) Policy for St. Kitts and Nevis.
“They were very positive,” Ms. James stated, noting that there was consensus by all representatives from the public and private sectors and trades union on the need to have a modern and robust OSH policy backed by supporting legislation.
The one-day consultation was held on May 03 at the Solid Waste Management Corporation (SWMC) conference room. The participants heard various presentations during a panel discussion featuring Joseph Jones of the St. Kitts and Nevis Trades and Labour Union, Donovan Herbert of the St. Kitts and Nevis Social Security and the labour commissioner.
OSH Specialist, Osric Forrest, was instrumental in guiding the exchanges during the group discussion phase that followed the panel discussion. The four groups developed content that was captured to include in the draft policy document.
Ms. James said a follow-up consultation will be held to complete the work.
“Once this is done, the Department of Labour will formulate a plan of action and seek assistance from the International Labour Organization (ILO) in the drafting of the policy,” Labour Commissioner James stated, adding that this was key as the policy must incorporate standards and best practices from the international community.
Subsequent to the ILO’s input, a committee will be established to “fine tune the draft” document. The members of the National Tripartite Committee will also be engaged on its details and this will be followed by a final consultation with all stakeholders to finalize the draft before it is passed to the “competent authority for approval.”
By devadmin|2018-05-22T18:46:55+00:00May 12th, 2018|Latest Articles|